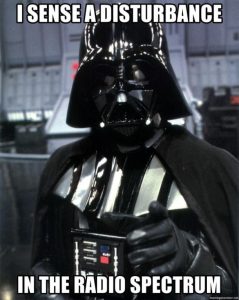 According to the Internet (which is always right), RFI is a disturbance in the radio spectrum generated by an external source that affects an electrical circuit by electromagnetic induction, electrostatic coupling, or conduction. As amateur radio operators we deal with RFI on a daily basis, and we all agree it’s getting worse not better. This is due to one simple fact: there are more sources of RFI around us today than in the past. We’re surrounded!

How did we get here? It’s really just the natural evolution of our addiction to electronic gizmos. Most of which contain cheap, poorly made switching power supplies.

Okay, that’s an admittedly subjective statement. What’s cheap and poorly made to one person is efficient design to another. It’s not hard to imagine a situation where some engineer in a far away land is told by a product designer not to worry about that radio interference stuff. Actually, the FCC has rules about this but compliance seems less than wonderful.

With more and more discussion and complaints about RFI we thought it would be helpful to share some real-life RFI mysteries and how they were tracked down.  We should note that for the purposes of this blog post we’ll be talking about the type of RFI that interferes with your rig. The other type, where your rig interferes with everything else, is not something we will discuss.

The E-cigarette and the E-interference

For those of you not familiar with the latest nicotine delivery platform: meet the E-cigarette.

Think of it as the digital version of analog smoking. In short, these devices work by heating a liquid until it vaporizes at which point the user inhales the vapor much like one inhales cigarette smoke. The liquid contains nicotine and other flavors which enter the body through the respiratory system and produce the same neurologic response (pleasure, relaxation, addiction) as cigarettes.

Alright.  Enough of the biology lesson. Let’s see what this has to do with amateur radio.

One of our stations was having a recurrent problem with QRM on the 147.300 MHz repeater output. The usual process of isolating equipment and turning things off around the house did not resolve the issue.  The characteristics of this QRM were as follows:

Let’s have a listen.

Modern SDR and SDR hybrids can be great for collecting data on these problems. Most have a wide-band receiver and a graphical display that will show the radio spectrum, waterfall, or some combination of the two. We are not suggesting that these substitute for a spectrum analyzer or other test equipment but the scopes do come in handy. Just keep in mind that these are not lab instruments so don’t read too much into what you see on the screen.

Now that the disclaimer is out of the way let’s take a look at how these display on the Yaesu FT-991A: 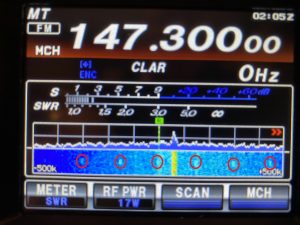 Note the frequency is centered on 147.300 MHz with evenly spaced signals on either side at 150 kHz spacing (the strong signal to the right of 300 is an unrelated QSO).

Down the Rabbit Hole

One of the lessons learned from this experience is that it’s easy to go down the rabbit hole, and to do so quickly. When the affected station shared stories of this odd QRM with other stations they too started reporting similar noise. But this turned out to be a  local problem and those other stations were not hearing the same thing. This led to unnecessary adjustments to a repeater, wasted time, and involving a lot more people in the investigation than needed; thereby drawing each of them into the same time-suck vortex.

So Lesson no. 1 from this exercise is Occam’s Razor, which roughly states that the simplest explanation is usually the right one. Or as Spock once put it, “Once you have eliminated the impossible, whatever remains, however improbable, must be the truth.”

After weeks of searching the mystery was solved and the source of the QRM was found to be coming from inside the house!  The culprit, as the title suggests, was a vape pen (e-cigarette) that belonged to one of the kids in the house (they’re  actually adults so don’t judge).

So here we present exhibit number one, the instrument of the crime: 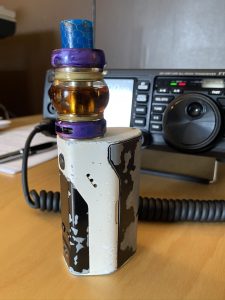 This is the vape pen. For those of you not familiar with these things, the body is all battery, housing three 3.7V Li batteries, each with a discharge rating of about 35A. When fired, these batteries energize a coil (located in the purple collar) which vaporizes the “juice” in the bowl and creates smokeless nicotine enjoyment. The general operating principle is that when you are ready to take a drag on this thing you depress the power button for a second or two (sound familiar?) which fires the coil, which in turn vaporizes the vape liquid, which delivers the nicotine vapor. The device sits idle until it’s time for another hit, which depending on your level of addiction could be some interval in the 10 second to 1 minute range (also sound familiar?) 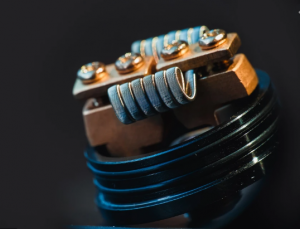 At this point it’s obvious that the vape pen is causing the QRM. But how? Is this coil the root cause? It’s a possibility. It is a coil after all and we know that coils can be inductors and inductors can create magnetic fields which in turn can be sources of RFI.  That’s probably too much speculating without collecting more data so let’s just say it’s a possibility.